The Bible is the Absolute

Please note that all DOWNLOADS are for Non-commercial use only.

Preached by Rev. William Branham with prayer line where the Word of Knowledge is in operation (1 Cor 12:8)

Interview and clips from prayer line for healing with Gift of Discerning of spirits (1 Cor 12:10)

Eyewitness account from a man called out of the congregation by name and healed in Jesus' Name! (Acts 3:6)

Back in the '80s and '90s, Believers' conventions with visiting preachers were arranged by the late Pastor Don Bailey Snr of the Stockport fellowship near Manchester, England. They were blessed enjoyable times of fellowship, prayer and of the Word of God.

On 1st January, 1990 during New Year convention being held in a conference centre in Shropshire, England, some Christian water baptisms were conducted for those wishing to be baptized in obedience to Acts 2:38 in the Name of Jesus Christ.

A young Malaysian student standing beside the abandoned open-air swimming pool witnessing the first baptism aimed her camera and took a photograph. Unbeknown to her at the time, when the film roll was developed the photo would display this amazing Shield! No one present at the time saw anything unusual: 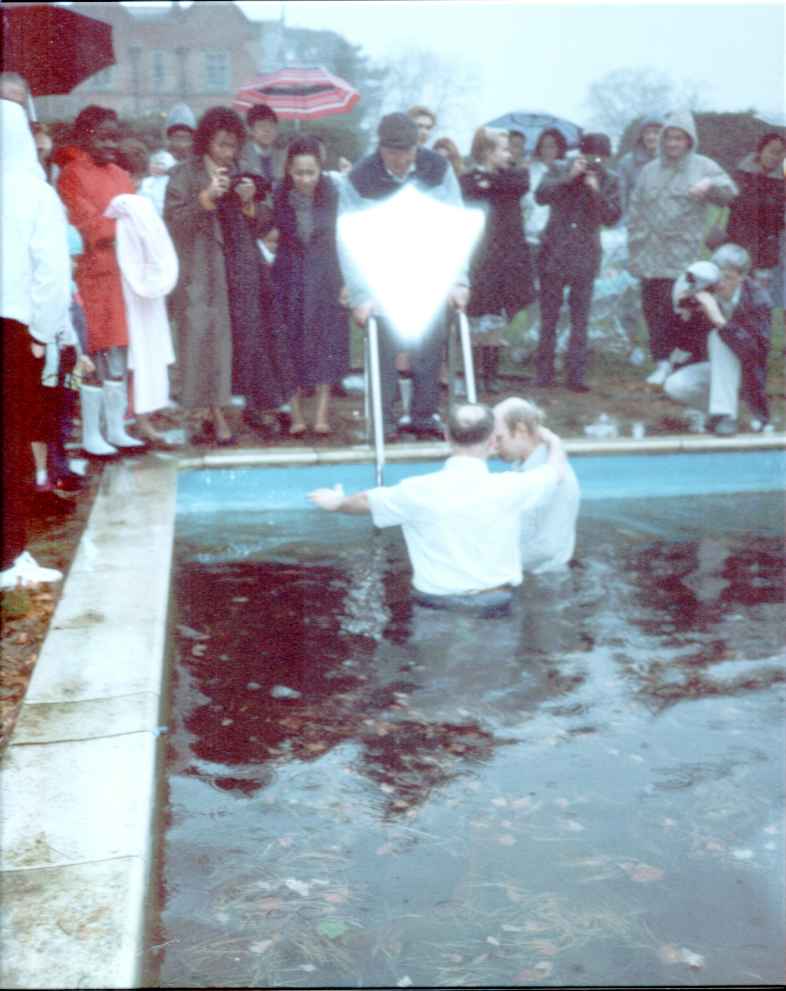 I have had the photo examined by several experts who agree that it is unique and that there is no obvious technical explanation. I think that Acts 2:19 might hold the answer.

At the same time I was kneeling on the poolside videotaping the baptism. Nothing unusual appeared on the video, which you can view below. Some have asked me why Pastor Don covered Barry's nose and mouth with his hand – I noted that he did not normally do this when baptizing – I think in this case it was care to prevent inhaling the icy cold water due to the shock of being plunged beneath it. Here is the actual video of the baptism where the Shield photo was taken:

STRAITWAY a documentary on Baptism in the Name of the Lord Jesus Christ (Acts 2:38)

Children's Dramatization of Acts chapter 9 telling how the resurrected, ascended Lord Jesus Christ confronts Rabbi Saul on his way to Damascus to persecute and kill the followers of Jesus. Saul's miraculous conversion turns him to be Paul - a messenger and bringer of the living Word to God's people. In loving memory of our brother, Timothy King, London, UK who made this film. Used with kind permission of Pastor Chandler.

Our prayer is that these films will be a blessing to you.